Welcome to my  blog! This is the home page of my new book, The Alignment of the Universe: Messages from Other Worlds.
This is where I will post up events, comments and discussions. If you have read it and would like to start a discussion, please do! All opinions welcome, but keep them civil please! 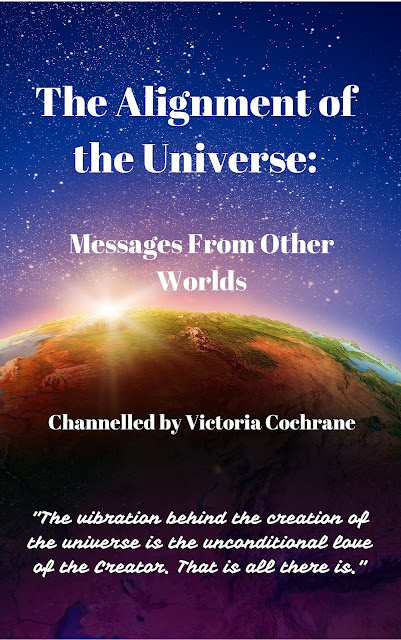 MEDIA RELEASE
Our alien neighbours are ready and willing to help Earth to learn to live in peace and to access universal knowledge, an Australian New-Age author claims.
Written by Victoria Cochrane, Theta Healing® practitioner, Reiki Master and psychic channel, the book claims to channel Masters of Light and members of the Inter-Planetary Galactic council who reveal previously unknown insights into life on other planets in far-off galaxies.
‘The Alignment of the Universe: Messages from Other Worlds’, Cochrane’s third book, is divided into three parts.
In the first part, ‘Unveiling Secrets of the Universe,’ the Masters explain such concepts as how the Universe was created, the real purpose behind the birth of Jesus Chris, the truth behind Earth’s encounters with aliens and the illusions of living in duality on the Earthly Plane.
The second part, ‘The Inter-Planetary Galactic Council’ outlines life on four planets and the star system, Pleiades. Part Three, ‘The Keys to Oneness’, teaches how all humans can raise their vibrations out of the energy of war, hatred and separatism to that of oneness, peace and harmony.
“It would be the height of arrogance for humans to think that Earth is the only planet to contain life,” Cochrane states. “There have been many reported alien encounters and many more that remain undiscussed. Most of the publicity around aliens has been extremely negative and fear-based, and much of the information the public has been told has been falsified or even hidden.”
Cochrane is under no illusion as to the scepticism she is likely to face with the release of this book, but she is adamant that many people will welcome it or even be relieved by it.
“I am by no means the only person on the planet to be receiving this information or to be in touch with alien beings. I am also encountering more and more clients who have lived previous lives on other planets, particularly Sirius, Arcturus and The Pleiades. These people have felt isolated and overwhelmed by the chaos and ego of humans on Earth, finding it difficult to fit in for all of their lives. My next book will be a collaboration with some of these people who wish to tell their stories. It was a relief to them that they weren’t going mad or just imagining things.”
Cochrane, who also works as an Early Childhood teacher, is not concerned about criticism. “Whether people believe what I have channelled or not is not my concern. I have been shown most of what is discussed in the book, and the experiences I have had are more than enough for me to know that the content of the book is true. However, it is not my job to make people believe. I have made the information available. What people choose to do with it is up to them.
The Alignment of the Universe: Messages from Other Worlds is published by Ingram Spark in soft cover and e-book form. Prices vary, but rrp is $3.99 e-book and $14.99 print version.
Excerpt from The Alignment of the Universe: Messages from Other Worlds

CHAPTER 5
Reclaiming Your God-Self
"The alignment of worlds has occurred and then passed, but the channel
for the relaying of information to Earth has remained. Awareness of the
availability of universal knowledge and information from other worlds who
were in alignment has been given to Lightworkers on Earth who have chosen to be the Wayshowers for others. For their service the Masters of Light are grateful, because the quest towards enlightenment and ascension has been a long and often difficult process, which without the grounding of ethereal, angelic and divine energy through the physical, human form would make the process untenable. Those who have already awakened to their God-self are tireless in their efforts to assist others in their awakening and to step into their Divine selves. All is given and all is available, because it is every human’s right to return to their Lightbody and to experience the joy and bliss that oneness with the all brings.
There are seven planets aligned to the Inter-Planetary Galactic Federation with members who are now willing to assist Mother Earth and her people in the quest to attain a permanent Fifth Dimensional State. Their messages of love and hope in this document are also intermingled with their own stories and advice. We cannot stress enough to those who are awakening the importance of heeding these messages. We also acknowledge the difficulties that Starseeds are facing as Earth is reaching a crescendo of duality — darkness is continuously clashing with light as those who feel their grip on power and corruption through a reign of terror and fear slip away as the shift of consciousness towards the light continues
around the globe.
Even though the reins of power seem to be in the grip of those intent on serving their own interests, the silent and powerful work of Lightworkers around the world, in communion with the Masters of Light, are making a steady impact on the grip that Third Dimensional energy has had on the human race for so long. It is evident in the way that acts of terror are no longer being tolerated and suffered in silence by groups and individuals who have, up until recently, felt powerless to rise above the domination of authoritarian rule. It is also shown in the noticeable rise in the number of people who are seeking answers to their own existence and higher truths away from the restrictions of religion. The second coming is truly underway."

"Hi Ange Have just read all 3 books of Victoria’s and her channeling has condensed ions of knowledge into a masterful simple way of learning of ‘the times’. If your spirituality has been waning, her words will inspire and inject spiritual enthusiasm and light so ‘you may do your work’. I felt so. ‘It’s Time Now’ say the Pleiaidian Emissaries. Not sure if Melchizedek and Kuthumi are typos or have been presented to her that way. In any case I want to thank Victoria as out of her book (literally) resurrected my Sirius Blue Capsule (Dog) which had been obscured temporarily and especially to you for love and healing and raising my vibrations so I could connect back to it. Peace Love and Light.  P. July 2020

"There would be no better time than now to read “The Alignment of the Universe: Messages from Other Worlds” given the global upheaval that is currently occurring.

The messages that Victoria has channelled explain that we have the opportunity to ascend from 3D to the 5D through sending love and light throughout the world to create oneness in humanity.  Raising our vibration, bringing in and sending out the light and love of the Creator will enable more people to ascend to a world of Unconditional Love, Peace, Tolerance, Equality and Compassion instead of the current paradigm of duality which is built on inequality, fear, greed and power over others.  The messages also explain how what is happening here on Earth is affecting our entire Universe and how beings on others planets live in peace and harmony where there is no ego.

The messages may question your ingrained morals and values but in a nutshell the undeniable truth is that Love is the Answer.

For me Victoria's most recent book was a timely reminder that we choose our path on Earth and that our current systems, political, social and otherwise, can and will change for the better if we have peaceful, inclusive goals in sight. I loved reading about how societies operating in one-ness are set up on other planets. Such beautiful idea’s and ideals! We could learn so much from these people! What an amazing book Victoria, thank you!
-- Reiny.

"If you're inquisitive and looking for a book to challenge everything you think you know, you need to read this one. I've read Victoria's two previous books which were fantastic and probably a good foundation to prepare you for this book. A very highly skilled Theta Healer, Victoria has channelled this book beautifully and no matter what your beliefs or understandings are, it's a read to stimulate your mind and enhance your understanding of the universe and yourself as a part of that. Highly recommended!!"
Amazon Customer

"Have read the book.  It's everything I expected it to be . Brilliant."
Karen.

"Hello beautiful woman , Thanku for writing yr glorious books . I am finding my way thru The alignment of the Universe & if ever there was a bible of truth ... Absolutely every word resonates as truth & such a relief that U beloved sister has had Th courage to put that info out for others. For me U have put into words that which I knew deep in the DNA & cells of my body as key codes of existence. It was like family passing by, Cos as soon as I read the words , The realisation is there as known truth & B4 I blink it's all gone in a flash , that I can't repeat or grasp it with my hands. It's sorta like allusive wisdom ha ha. I laugh like a child cos it feels I am trying to catch a rainbow & clutch it with my hands but the Rays escape thru my fingers. Wisdom comes to me as knowing but the mind tries to grab it to explain or look for tangible evidence. It seems I AM a multidimensional creature & being called in some way to receive instruction from another Dimension. My life is a riddle & I jst follow Th breadcrumbs. However Wld U B willing to trade some service with me. I feel U have a puzzle piece of how I could hear, listen & communicate beta with other realms that may have an interest in me... U seem on good terms with those others so would U ask for me & maybe we play a bit.  If U R interested. I AM & I AM being called to U"
L.G. 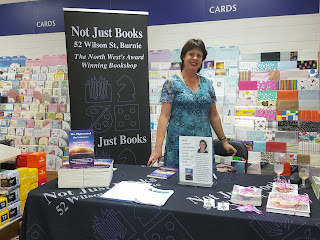 My book launch was a great night at Not Just Books in Burnie.
Read more »
Posted by Reaching Out Spiritual News at 00:00 No comments:

16-7-20
I can't believe it is five years since I published this book, but the messages are just as relevant as ever! I have recorded the first two chapters on YouTube to give you a taste of this beautiful book that I feel honoured to have channelled.
To listen to the first two chapters on YouTube go to
https://youtu.be/woaRb1p-rtg
and https://youtu.be/4_YqlK_k_fs
I am also excited to announce that my fourth book, "The Book of Life: Learning From Mother Earth," is only months away from being published. Watch this space!
Blessings,
Victoria